Actinomycetes are those groups of bacteria which are thin and have cell wall made up of muramic acid. Their nuclei are prokaryotic and are susceptible to antibacterial antibiotics. They look similar to fungi superficially as they form branching filaments. They are related to mycobacteria and corynebacteria. 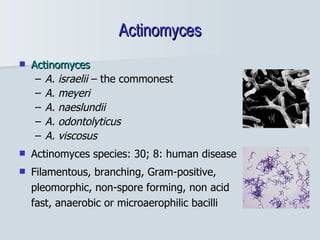 They are Gram-positive, non-sporing, non-motile, non-capsulated filaments. They break into bacillary and coccoid elements. They are also free living in nature and are mostly found in soil.

There are different genera of Actinomycetes that are of great medical importance. They are as follows. 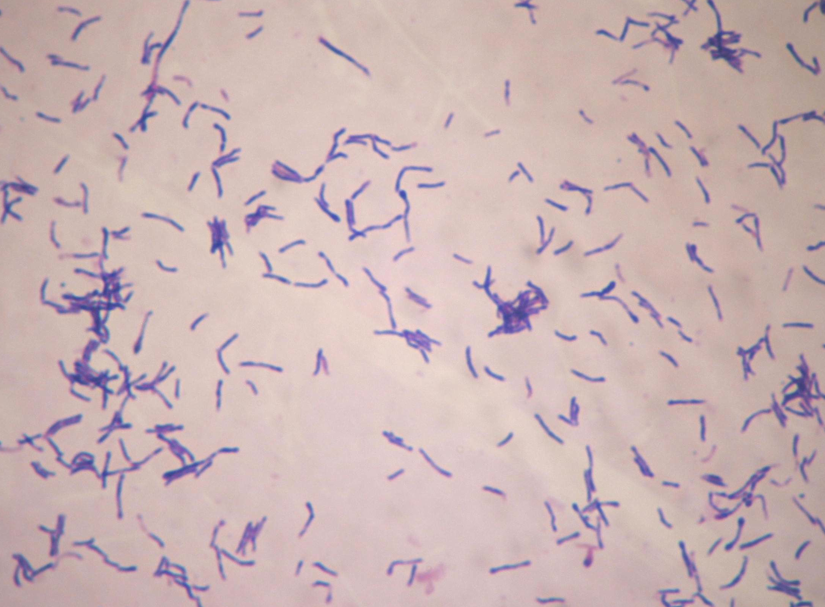 Actinomycosis is a disease which is a chronic granulomatous infection. It is found both in human beings and animals. There is development of indurated swellings, mainly targeting the connective tissue, and also suppuration and the discharge of ‘sulphur granules’. The lesions often face towards the skin which may lead to multiple sinuses.

It is an endogenous infection. The species of the causative agent are mostly found in mouth, intestine and vagina as a commensal. These organisms may invade other tissues in case of trauma, foreign bodies or poor oral hygiene. The common species as the causative agent is Actinomyces israelii. Some other species are also responsible for this disease condition. They are: A. naeslundii, A. viscosus, A. odontolyticum, A. meyeri, A. gerencsonei and Propionibacterium propionicum.

It is the mixed infection condition where other bacterial infections are also associated. This may increase the pathogenic effect.

OTHER BACTERIA ASSOCIATED WITH ACTINOMYCOSIS

Actinomycosis is found in different clinical forms in human beings. They are:

It is characterized by indurated lesions on the cheek and sub-maxillary regions.

It is characterized by the presence of lesions in the lungs mainly pleura and pericardium which may spread outwards through the chest wall.

It is characterized by presence of lesions around the cecum and may also involve the neighbouring tissues and the abdominal wall. Through portal vein the infection may reach to the liver which is exceptional.

It is generally associated with the use of intrauterine devices. It is characterized by the formation of abscesses mostly in bone and soft tissue with chronic draining sinuses to the exterior.

SOME OTHER FORMS WHERE ACTINOMYCOSIS OCCURS

Actinomyces is also involved in gingivitis and periodontitis which are the inflammatory diseases of the gums and also sublingual plaques leading to root surface caries. It may also present as mycetoma.

In the exudate or secretion, sulphur granules are noticed. When observed in disease tissue, it is found as a long, branching mycelium with attached sulphur granules. If the bacterial species is to be isolated from clinical specimens, then, anaerobic environment must be maintained. In micro-aerophilic conditions also it can be identified and isolated. For treating this disease condition, surgical drainage or excision is performed along with the use of large doses of penicillin for several weeks or months.

WHAT IS THE LABORATORY DIAGNOSIS OF ACTINOMYCETES SPECIES?

1. Firstly, the sample like pus or tissue is collected. For pulmonary disease, sputum is required.

HOW IS TREATMENT DONE?

For treating this disease condition, penicillin or tetracycline is used for long term only after which the response is achieved. The mentioned medicines should be used for several months which may be supplemented by surgery if necessary.