a) The diagnosis is fully confirmed if leptospires are isolated in blood culture.

b) Two or three drops of the patient’s blood should be added to each of number of small screw-capped bottles containing 3ml of a suitable liquid medium.

c) Successful isolation provides an opportunity for the identification of the serotypes responsible for the infection.

d) However, leptospires are present in the peripheral blood during the first week of the disease only, rarely after the eighth day, so that by the time leptospirosis is suspected as a possible diagnosis, it may no longer be possible to obtain a positive blood culture.

e) Peritoneal inoculation of guinea-pigs or golden hamsters with whole blood during the first few days of the illness is done.

f) This is followed some days later by cardiac puncture and culture of a few drops of the animal blood is an alternative method of isolating the organism.

g) Leptospires occasionally may be seen by dark ground microscopic examination of the patient’s blood.

h) But, care must be taken in their recognition because filamentous artefacts, called myelin bodies, which are derived from the red blood cells may stimulate them.

a) Leptospires may be present in the urine during the second week of illness and continue to be excreted intermittently for 4-6 weeks.

b) They are most likely to be seen during the second and third weeks by dark-ground microscopic examination of the centrifuged urinary sediments.

c) Direct culture of urine is not usually successful because of the presence of contaminating organisms.

d) But, positive isolates may be obtained by intra-peritoneal inoculation of freshly voided urine into laboratory animals followed by culture of heart blood 4 to 5 days later.

e) Because leptospires are very sensitive to acid urine and may be lysed by antibodies present in the urine, the urine should be examined for leptospires immediately after being voided. 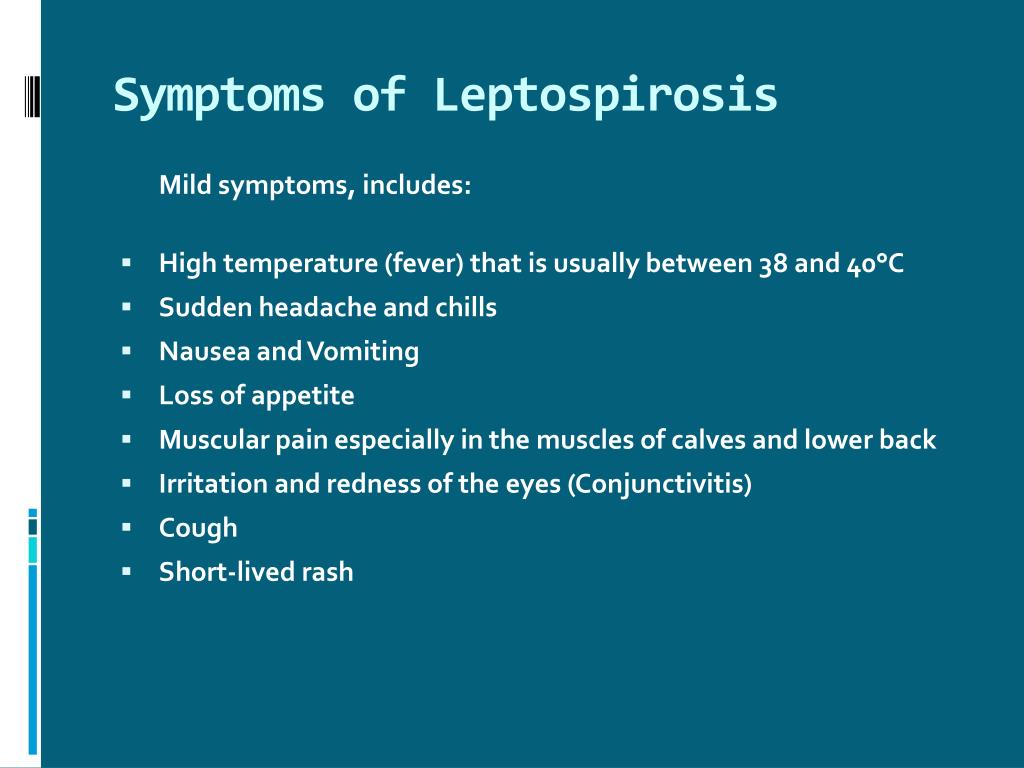 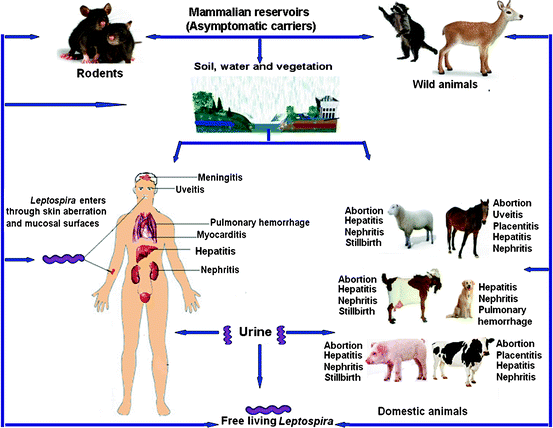 a) For the identification of the serotype of  a newly isolated strain use is made of agglutination and agglutinin-absorption tests.

b) For this, a homologous antiserum prepared by immunizing a rabbit with a living culture of the unknown strain is required.

c) The results should be compared with those obtained in parallel tests made with standard strains and their antisera.

d) This is a specialized and time consuming technique and is best carried out in one of the WHO/FAO Leptospirosis Reference Laboratories to which all new isolates should be sent for identification. 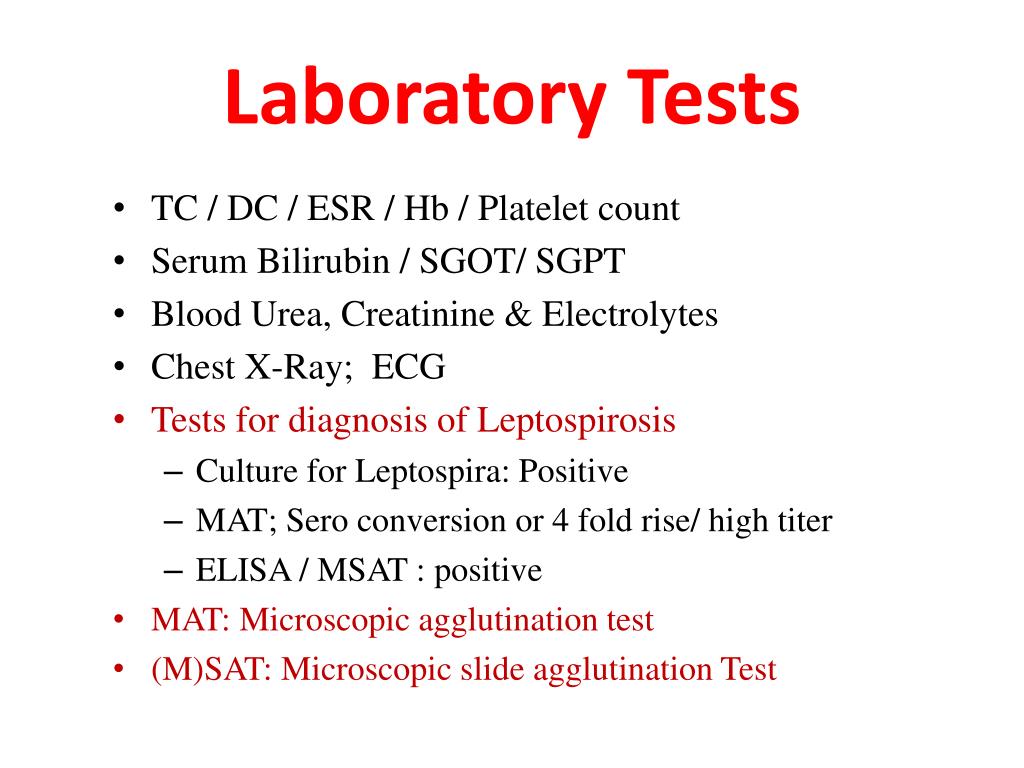 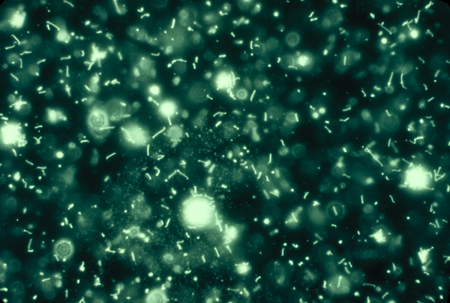 a) Specific antibodies are detectable towards the end of the first week of the illness and increase during the second to fourth weeks, after which they begin to decline.

b) Residual amount of agglutinating antibodies may remain for many years after the infection has occurred.

c) It is advisable to examine a specimen of the patient’s serum during the early days of the illness and at 4 to 5 day intervals.

d) This helps to demonstrate a rise in the antibody titre which is diagnostic of current infection.

e) Several different serological tests are employed to demonstrate the presence of specific antibodies in the patient’s serum.

f) The microscopic agglutination test has been used extensively in the past.

g) Since, this test is serotype specific, separate tests have to be set up against each serotype likely to be responsible for the case under investigation.

h) Either pool of different serotypes may first be used as screening tests to cover infection by all possible types.

i) Alternatively, a rapid macroscopic slide agglutination test may be used.

j) In the early stages of infection, cross reactions between the various serotypes used as antigens may be misleading, but subsequent tests usually results in the highest agglutinating titre being obtained against the specific infecting organism or a closely related serotype used to represent in the test.

k) Other serological tests that differ from the agglutination test in being genus-specific can detect antibodies in human sera resulting from leptospiral infection due to any of the serotypes.

l) Of these, complement fixation test is being used in many laboratories in Great Britain.

m) The antigen is obtainable from the Leptospirosis Reference Laboratory where the genus specific antigen is prepared from a biflexa strain, viz. serotype patoc., with the addition of antigens of several representative pathogenic serotypes.

n) Since the complement fixing antibodies tend to decline more rapidly than the agglutinating antibodies, this test is suitable only for the diagnosis of current infection.

o) The sensitized erythrocyte lysis (SEL) test which does not require complement titration may be used as an alternative.

p) Immunofluorescence techniques may also be helpful, particularly the indirect method, to demonstrate specific antibody in the patient’s serum.